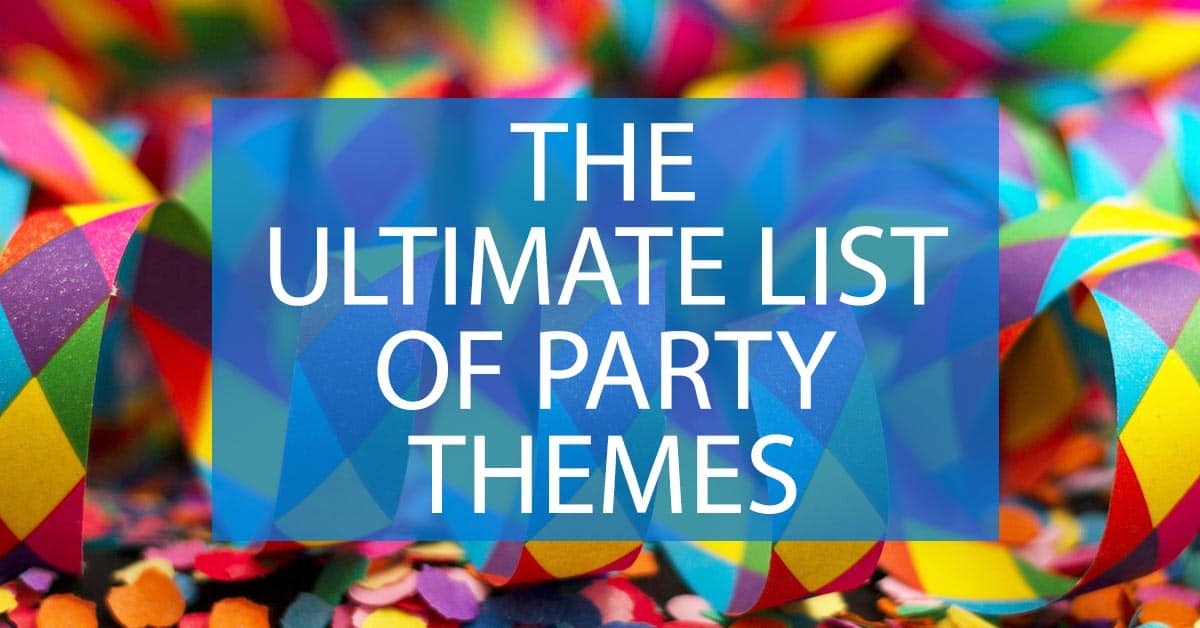 A fun party theme is one of the best ways to bring your party alive. A party theme helps tie in all of the aspects of a good party, the food, drinks, outfits, venue and activities. Plus it really gets your guests involved and in the party spirit. There are so many good party themes to choose from, the list is endless. So we have put together our best themes for a party to help you plan the best themed party ever.

Another great collection of party themes are those inspired by movies. Go for popular classics that your guests will know and love for a fun filled party theme. Movies that have a good range of characters are best, so your guests get some choice and variety in their costumes.

We all love a good TV show. So what better way to celebrate than with our favorite TV show as a party theme. Here are our top party themes that are inspired by TV shows.

If you love travel, then one of these country themed party themes is a great option. In addition, you can create a themed menu to tie in with the party theme and enjoy a variety of foods from around the world.

If you and your friends are the sporty kind, then a sports themed party is great fun. It’s likely you will have most of the dress up gear as well, which is an added bonus!

If you are throwing a big event, then you can really go big with the party theme. These themes work really well with large numbers at larger venues, so check out these party themes if you are hosting a big bash!

Historical party themes are great fun as they give your guests a clear guideline of the theme but flexibility within it to be creative. Plus it gives the history buffs a change to show off. And of course makes a great photo opportunity with all of the themed, historic costumes.

If you and your friends are book lovers, then a book themed party is a great choice. Choose something with plenty of character scope like one of the following:

If you want your party photos to really make a wow statement on social media, then a color themed party is the way to go. After all, what’s more eye catching than an entire party in a color co-ordinated theme!

Party themes inspired by times of the year

Oftentimes, these are the most popular party themes as they fall easily into place at certain times of the year. Plus they can become traditional and be hosted year after year, which is really nice.

If music is your thing, then why not opt for a music themed party. As well as the costume side of things, you have your playlist pretty much sorted when you plan a party theme inspired by music.

For the fashionistas out there, these fashion party themes are such fun! Remember to help out guests out on your invites with some costume examples and ideas so they have something to go on.

Without a doubt, kids party themes are so much fun. Children love a themed party, and there is something very special about seeing the wonder in their eyes when they walk into a themed children’s party.

Children’s party theme ideas are endless. But the best themes are the ones that really follow your child’s interest. For example, their favorite book character, activity or topic they are really interested in are sure to be winners. Here are some of our most popular party themes for children.

Usually, an activity based party theme can really give a party a great structure and focus. Plus it makes it easy to plan a schedule as you have a clear idea of the activity and it’s timings. Most of these can be adapted to work for adults and children alike. There are so many activity themed party ideas to choose from, here are our favorites.

Lastly, great for college parties or older teens, these funny party themes will certainly bring some laughs to your party.

To conclude, a themed party is a lot of work but is so worth it! A great party theme really adds to the ambience of your party and is one of the best ways to get your guests in the party mood. Whichever party theme you choose, remember to give your guests clear instruction in their invites about what to wear, what to bring and what to expect of the party.

In addition, you could provide some costume examples or ideas to help get their creativity flowing. But above all, enjoy the planning and excitement that a themed party brings.