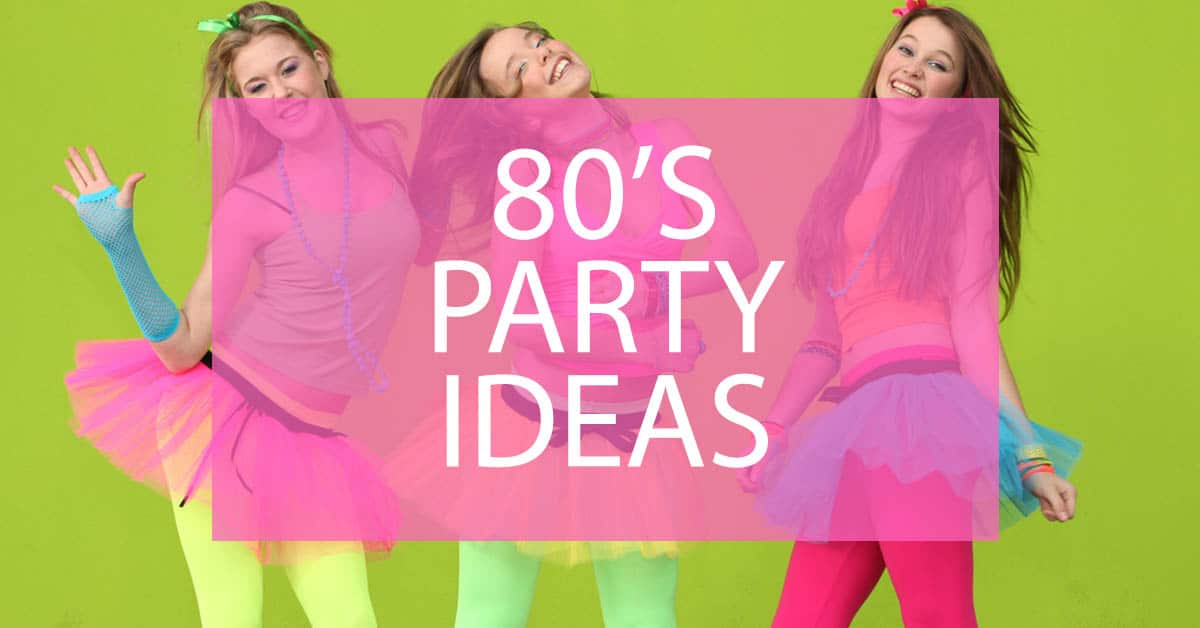 This year, members of Generation X who were born between the mid-1970s and 1980s will celebrate milestone birthdays! You grew up in the world of electronic music, early computer technology, and ‘Back to the Future’ of the 1980s. You will recall the spirit of this rocking period and here are our favorite 80s party ideas for a retro theme party.

A nostalgic 1980s party theme guarantees everybody is dancing, remembering, and wearing big hair or bright colors. An 80’s themed party is a fantastic opportunity to arrange a fun and colorful celebration that your guests will never forget!

Consumerism and materialism are usually viewed as having made a resurgence in American popular culture during the 1980s. Younger folks were willing to spend the money they earned, as evidenced by the items they bought and how they presented themselves. Clothing, hair, and cosmetics were daring. Music was synthesized and exploratory. A new wave of electronics, such as the Walkman, allowed individuals to listen to what they liked when they wanted, allowing them to express themselves more freely.

Towards the end of the 1980s, many fashion and musical trends had become obsolete. However, bringing them back is half the pleasure of hosting an ’80s party. Anything goes!

If you are looking for 80s party ideas to get your guests pumped up for your completely ace 1980s party, this list will inspire everything from the brilliant tunes to the fabulous party favors.

Put on your acid-washed jeans and leg warmers, then continue reading for advice on organizing the ultimate 1980s-themed party.

The color pallet for garments, makeup, shoes, and accessories in the 1980s was expanded to include neon pinks, highlighter yellows, and electric blues. Don’t be scared to be daring with your 1980s-themed party attire.

Shoulder-padded body suits, skin-tight spandex, and giant leg warmers were the fad in the 80s. There was so much fabulous star-powered fashion in the 1980s that it would be a disservice not to recognize it. Request that your guests draw inspiration from the decade’s most prominent celebrities and tastemakers.

Character from an ’80s movie

The 1980s produced many films that are now regarded as classics. Some have gone on to make numerous spin-offs and sequels. Encourage your friends to watch their favorite 1980s movies to gain fashion ideas. Putting on a red sweatshirt and blue pants will suffice to transform you into Elliott from “E.T.”

Additionally, you can collaborate with other attendees to dress like your favorite 1980s film characters.

The ’80s were the era in which the relationship between music and fashion was most apparent. Musicians like Cyndi Lauper, Madonna, Prince, and Boy George influenced the masses to dress and style themselves as though they were on the verge of appearing on MTV.

Go retro with the party venue

To have a genuinely fantastic 1980s-themed party, you must pay attention to the details. Your guests’ attire is crucial, but you also need to transport them. No one will feel like it’s the 1980s if you continue to yell at your smart speaker to play your music.

Here are some suggestions and ideas for the atmosphere of your 1980s party.

If you attempt to create the atmosphere of a teen’s room in the 1980s, hang era-appropriate posters on the walls and mix movie and music posters. Add Memphis-style geometric stickers on the walls for a truly edgy atmosphere; you can remove them when the party is finished.

The 1980s were a daring era, and your party decorations should reflect this. Initially, amass as much neon as necessary. Feel free to complement your neon with checkerboard and metallic accents. Use anything that resembles a Rubik’s Cube. Your objective is to make the area appear as much as possible, like a place where the “Fame” characters would choose to hang out.

Some of the most famous fashions of the 1980s consisted of amusing, wearable trinkets that made excellent party favors. Whether you spread them on the tables, have the DJ distribute them, or include them in favor bags, your guests will go crazy for exciting throwbacks!

Sunglasses or shutter shades in the style of the 1980s, slap bracelets, slinkies, little Rubik’s cubes, or canisters of aqua net hairspray could be possibilities.

Although Madonna and Michael Jackson’s well-known pop songs may be the first to come to mind when thinking of 1980s music, numerous other genres and subcultures flourished during the decade.

While narrowing down your party’s soundtrack might help establish a tone, it’s more fun to include your guests by asking them to contribute to an all-encompassing ’80s mixtape that provides for new wave, hip-hop, hair metal, and punk.

Even though an authentic ’80s playlist would only be on a cassette tape, the most straightforward approach to get all of your attendees involved is to make a playlist on Spotify and provide the URL to them before the party. In this manner, everyone will feel like they have contributed to the celebration by adding their personal preferences.

Even while chatting and admiring everyone’s outrageous costumes is sure to be a joy, all parties require some action to maintain a high energy level. In addition, a fun-filled game might allow you and your friends to embrace your ’80s selves. Attention all method actors

Try the following activities to elevate your 1980s celebration.

A costume contest in which guests pick their favorite ’80s outfit can be a powerful incentive for fashion-averse individuals to dress up and follow your 80s dress code. Pick your fave neon colors, legwarmers and fingerless gloves, for an 80’s party costume to remember.

Request your friends to send their best ’80s dancing songs in ahead of your ’80s dance session so that you can create a fantastic playlist. Colorful party lights will set the scene for everyone to get down on the dance floor. And you may want to have tissues if someone begins to cry when Diana Ross and Lionel Richie’s Endless Love start playing.

With an ’80s-themed karaoke party, you can invite your friends to perform their favorite songs of the era. There is nothing more hilarious than watching your pals attempt to sing the high note in “True” by Spandau Ballet.

Don’t want to invest several hundred dollars in a karaoke machine? You do not need to! Only a mic and a tiny amplifier are required. Then, search YouTube for karaoke versions of your favorite ’80s hits, which frequently contain lyrics.

80s quiz or board game night

A quiz night is an enjoyable and challenging way to test your visitors’ knowledge of the 1980s. Find out who recalls the number of weeks “Thriller” topped the charts or the weapon that Indiana Jones mainly used. Make sure you have a solid assortment of topics ranging from events and politics to fashion, music, and movies before printing your trivia cards.

Gather your friends around a table and play Trivial Pursuit, one of the most widely played games of the 1980s, if you do not wish to build your own quiz game. Whether you want the conventional version or the ’80s edition, you are sure to evoke a strong sense of nostalgia for the 1980s.

You undoubtedly recall when your relatives and friends huddled around a Nintendo console or visited an arcade to play video games. In contrast, children of the present age mostly connect gaming with smartphones and high-tech consoles. You may fascinate your guests by including vintage video games such as Tetris and Pac-Man in your ’80s party.

One of the most fun 80s party ideas that will surely surprise your guests is decking out a retro photo booth.

The 1980s were the polaroid camera’s heyday. Children in the 1980s enjoyed the rapid development of photographs. In this day of smart gadgets selfies, something is endearing about an old polaroid camera.

A polaroid kiosk is a beautiful way to include the era’s technology if you plan to put up a photo booth. Your attendees will bring home a party favor dripping with vintage charm! While a polaroid camera alone is sufficient for the theme, you can get things to another level! Try adding fun 80s props such as rocker wigs, electric guitars, boomboxes, and enormous mobile phones! The more the authenticity of your props, the better!

In addition to conversing, guests enjoy coming to celebrations to devour snacks and drinks. In addition to filling bowls with sugary snacks and treats, several snack trends from the 1980s are still as delicious as they were generations earlier.

Examples of possible snacks are bagel pizzas, Hi-C juice cartons, multicolored Jell-O, and microwave popcorn. All of these delights were decade-defining staples during the 2000s. They will give enough energy for your guests to squeeze in a few extra minutes on the main stage.

These 80s party ideas can get you started if you’re trying to organize a celebration that rocks! A 1980s-themed party is an excellent way to celebrate the Gen Xer in your life. Or harken back to a period when anything looked possible! Your memorable 1980s party will take your friends to a special and nostalgic era; they may not even want to travel Back to the Future!