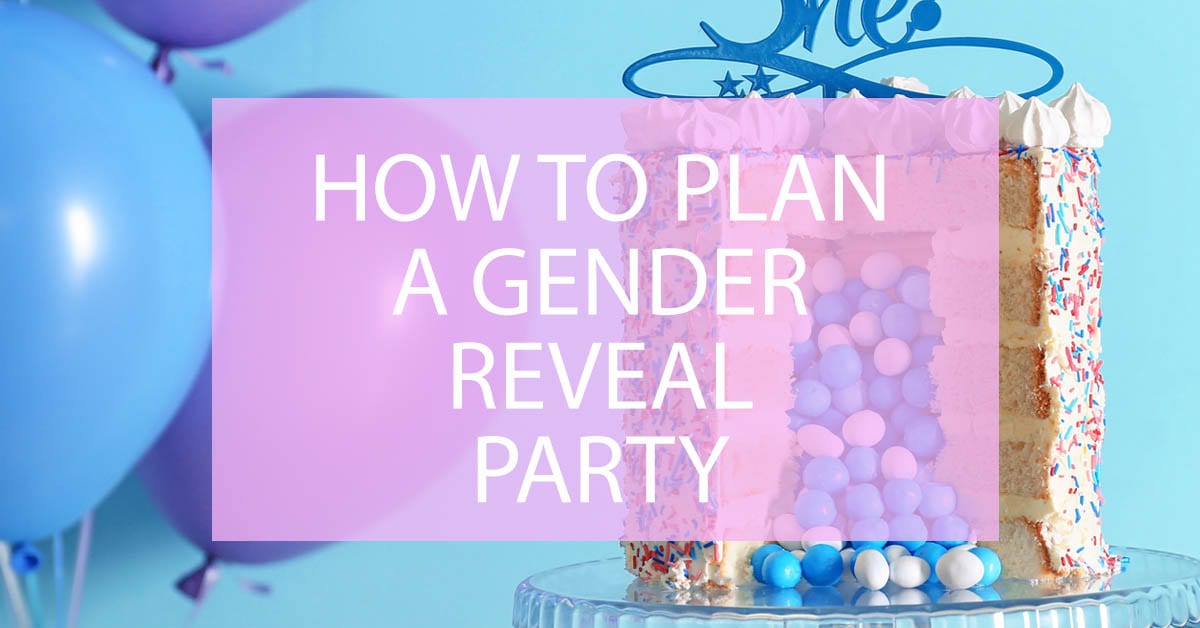 Gender Reveal parties have taken over the internet. And for good reason! Finding out the gender of your new baby is so exciting. Plus sharing the news with your family and friends is something you will remember forever. So if you have recently announced your pregnancy and are ready to start planning your Gender Reveal, read on to find out how to plan a Gender Reveal Party the easy way!

Gender Reveal parties are fun for everyone involved. And documenting the experience can make lasting memories. That said, planning a Gender Reveal party can be kind of confusing. Who do you invite? What should guests do at the party? How do you determine the gender of the baby without ruining the surprise? What’s the best way to reveal the baby’s gender?

Below, we’re answering all your questions about how to plan a Gender Reveal party.

How to plan a Gender Reveal Party

1. Find out the Baby’s gender

First off, you need to find out the gender of the baby. But, if you want to be part of the surprise reveal, you need to make sure you don’t accidentally find out at the scan!

Here’s how to keep yourself from finding out the sex of the baby before the reveal. Schedule an ultrasound for about 20 weeks into your pregnancy. Then, ask the sonographer to write down the gender of the baby on a piece of paper and seal it inside an envelope. And if you find out you are having twins at this scan, you might want to check out our fun ideas for a Gender Reveal with twins!

2. Get a co-planner for your Gender Reveal Party!

Once the scan is completed, you’ll want to enlist a friend or family member to help you organize the party. They will need to be privy to the baby’s gender. And make sure they’re good at keeping secrets though because they’ll be the one organizing the reveal!

3. When to have a Gender Reveal Party

In some cases, the sonographer may ask you to come back and book another appointment at a later date to be able to determine the baby’s gender. This is why you shouldn’t plan your party immediately after your ultrasound appointment! After all ,it’s not guaranteed that you’ll discover the baby’s gender at the first appointment.

4. Where to have a Gender Reveal Party

5. Decide on a Gender Reveal Theme

Now that the date and gender are out of the way, it’s time to have some fun!

Most Gender Reveals stick to the classic pink and blue theme: pink and blue cocktails, napkins, décor, and party games. You could even separate your guests into pink and blue teams and have competitions between the two.

But there are many popular Gender Reveal themes that you can choose from. Here are a few of our favorites.

To make it unique to you, try planning your Gender Reveal theme based on your interests and what you love to do. Are you outdoorsy? Make it nature-themed. Are you into baking? Go for the super cute ‘cupcake vs stud muffin’ theme. The possibilities are endless! There are so many cute Gender reveal decorations to choose from.

6. Plan How to Reveal the Gender

This is what everyone’s waiting for!

Of course, the big reveal is the highlight and centerpiece of your party. So you want to make sure it is carefully planned and has a big wow factor! Below are some of the most popular ways to reveal a baby’s gender:

Bake or order a cake with white frosting on the outside and a pink or blue color on the inside. When you cut into the cake, the gender will be revealed, and everyone gets a sweet treat! If you order the cake, you can give your envelope directly to the bakery. You can also do this with cupcakes and get everyone to take a bite at the same time. There are heaps of gorgeous and fun Gender Reval cake ideas to choose from.

Get a friend to fill a sealed box with pink or blue helium balloons. When you open the box, the balloons will float out, revealing the baby’s gender. Learn how to make your own Gender Reveal Box here. Or if you aren’t feeling crafty, you can buy a ready-made Gender Reveal box.

Another fun balloon option, fill a helium balloon with pink or blue confetti and pop for a shower of color!

Another easy DIY option, fill a pinata with pink or blue confetti and break it open at the party to reveal the gender of the baby. Follow our easy guide to make your own DIY Gender Reveal pinata.

If you’re willing to get a little bit messy, have a friend fill water balloons with blue or pink paint powder and hand them out to your guests. Wear white and your guests will shower you with paint to reveal the gender. It’s messy and requires space outdoors, but it does make for great photos!

If you have a furry friend, then why not involve your dog in the big reveal! There are heaps of ways to get your dogs in on the action with our Best Gender Reveals with dogs ideas!

As much as we love getting pets involved, we love getting the almost big siblings to help out too. They can run in with colored clothing, wear cute messages or even hold hands, to show one and all if they’re getting two bros, two princesses, or one of each! Check out our best Gender Reveal with siblings ideas here.

Gender Reveal confetti cannons are great fun and make a great impact reveal. Give all of your Guests a cannon too, to really add to the anticipation!

If vehicles are your thing, then a Gender Reveal burnout is a fun, outdoor reveal idea!

In a similar fashion to most important parties, try to send your Gender Reveal invitations out about four to six weeks in advance to give guests plenty of time to reserve the date, RSVP, and find a babysitter if need be.

You may also want to consider including a small explanation of what a Gender Reveal party is. Considering they’re quite a new phenomenon, many people don’t know what they are and might appreciate knowing what to expect.

And to help you get those invites sent, you can use our FREE downloadable Gender Reveal invites below.

8. Plan a menu for your Gender Reveal

Gender Reveals aren’t typically very long. And people will often drop by, see the reveal, and then head home. While this doesn’t require a meal, it’s always a good idea to provide some snacks, appetizers, or desserts. There are tons of fun Gender Reveal Party foods that you can incorporate into your theme – be sure to check out our Pinterest board for inspiration that works for you.

If you have time, make signature cocktails (or punch!) for guests that align with the pink and blue theme. Check out this recipe for a Pink Senorita cocktail and this one for Blue Raspberry Spiked Lemonade. Alternatively, you could find blue cans of beer (like Blue Moon or Bud Light) and rose wine. Or go non-alcoholic in honor of the Mama to be with our Baby Shower punch ideas.

Great Gender Reveal parties always ask guests to guess the gender of the baby. You could ask guests to guess when they arrive and hand them a blue or pink drink or accessory based on their answer. To make the betting more interesting, set up a raffle where guests will win a prize if they guess correctly.

If you’re your guests are keen to participate, ask them to “Wear their Guess” to the party. This means they either show up wearing pink or blue depending on their guess.

Play some fun Gender Reveal Party Games with your Guests. Our favorites are Baby Bingo, Find the Guest and Who Knows Mommy Best!

Or go for these XL Gender Reveal Posters to gather your Guest’s votes and guesses on Baby’s statistics and gender! Play old wives’ tales to see if your guesses are right.  You can download this entire set now for just $9.99

All good parties need some music and anything goes when it comes to a Gender Reveal. Upbeat and fun is best. Check out our Baby Shower Music playlist for more ideas.

Some families like to keep a Gender Reveal party really casual. If so, our Gender Reveal t-shirts are a great idea! You can even get one for your partner too!

Or if you want to go a little fancier, check out our Best Baby Shower outfits for some pretty maternity dresses and ideas.

Before the Gender Reveal party begins, make sure you’ve got your cameras ready! You can hire a professional photographer or videographer for the event or just ask a friend to be on photo duty.

To give the photos a personal touch, grab a Polaroid, and have guests write messages to the baby on the back of the shots as they come out of the camera.

Nowadays lots of families have a Baby Shower and a Gender Reveal party. Of course, it’s up to you, but both parties focus on a slightly different thing.

You can have a Gender Reveal and a Baby Shower in one if that works best for you. But why not make the most of the celebrations by doing both!

Check out our post on Gender Reveal Quotes and Sayings for heaps of ideas.

Obviously, the pandemic has made it difficult to plan some events.   A drive-by Gender Reveal however is a terrific and safe way to still share the excitement with your loved ones. Many parents are also continuing the theme with a Drive-By Baby Shower later on in their pregnancy.

The idea is to have guests drive by a selected location on a specific day and time.  In other words, a parade of cars with guests driving by the expecting parents in excitement.  Meanwhile, they share their well wishes and learn the gender in a creative manner, all from their vehicle.

Gifts for a Gender Reveal

Gifts are certainly not expected for a Gender Reveal. However, many guests will bring a gift regardless. After all, a new baby is certainly something to celebrate!

We have put together some of our favorite Gender Reveal gift ideas for inspiration.

How to plan a Gender Reveal Party FAQ

Who usually plans a Gender reveal?

Usually it is the parents-to-be who plan the Gender Reveal with a little help from a friend or relative who is “the keeper of the gender”! This person will be the one who knows the baby’s gender from the ultrasound and prepares the actual reveal.

How many months should you have a Gender Reveal?

Usually a gender reveal is held around the 5th month of pregnancy to allow for a reliable ultrasound to determine the gender of the baby.

Do you bring a gift to a Gender Reveal party?

Often guests will bring a gender neutral gift to a gender reveal party. Occasionally the parents to be may have a gift registry that guests can choose from.

Who do you invite to a Gender Reveal party?

Generally, the parents-to-be invite their close family and friends to attend their baby reveal. It is most often a co-ed event to reveal the baby’s gender to everyone at once.

If you are planning a Gender Reveal, then simply follow the steps above and you will have everything covered! Remember, a Gender Reveal can be as low key or as high profile as you choose. If a small reveal on social media is your thing then go for it! Or if you want the bells and whistles of a big reveal, then plan away. After all, this is a very special event!