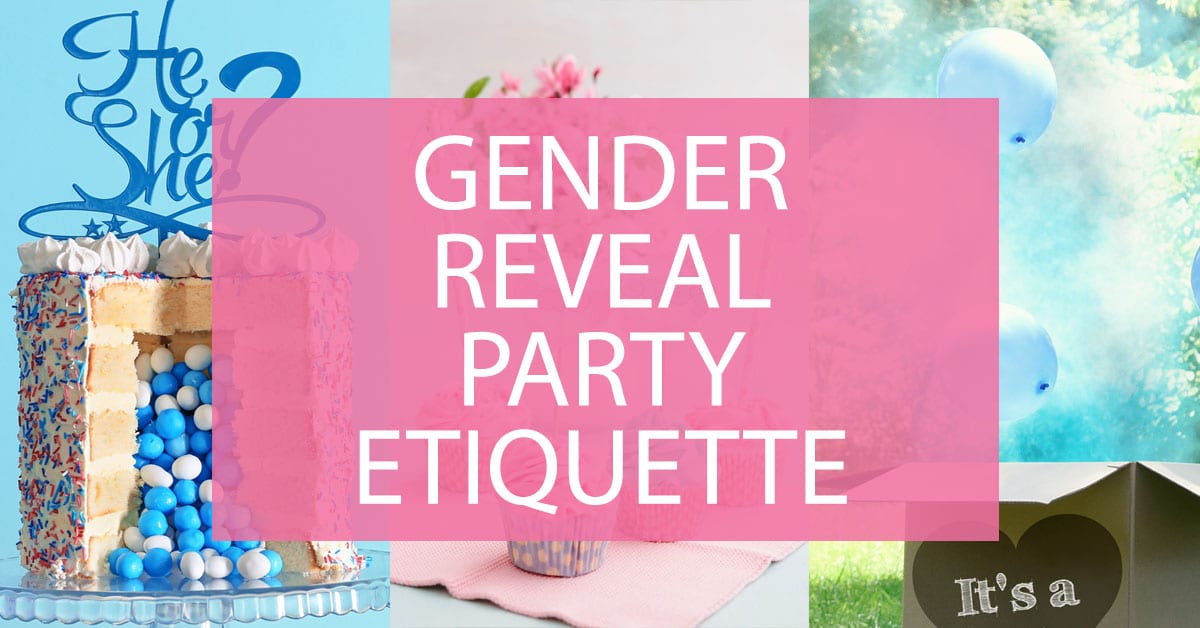 What is a Gender Reveal Party?

Simply put, Gender Reveal parties are fun family get-togethers where the parents reveal the gender of their imminent arrival.

They began as a YouTube video back in 2008 and took off in 2010. And they’re all about having fun with the tantalizing news that everyone is desperate to know.

Read on to find out all you need to know about Gender Reveal party etiquette.

What do you do at a Gender Reveal Party?

Reveal the gender! Usually Gender Reveal parties are small, informal gatherings. However, some parents like to combine them with the Baby Shower for one, double whammy party. In that case, check out our ultimate guide to running a Baby Shower party.

Usually Gender Reveal parties take place around week twenty after the parents themselves know the gender. The point is to reveal the secret in a cool way, usually by displaying a color. You could order or create a Gender Reveal cake, which when cut into reveals colored pink or blue insides. Some pop Gender Reveal balloons to shower colored confetti.

Tone things down by opening an envelope. O kick things into high gear with colored light sabers, smoke in car exhaust pipes, billowing down the drive, paint guns or scratch cards. Another popular idea is a Gender Reveal balloon box.

Just be creative and find ideas that tickle your fancy and suit your budget.

Are there games at a Gender Reveal Party?

Baby Showers are all about silly, fun games. You could decide to go down this route for your Gender Reveal party too.

But you don’t have to.

Gender Reveal parties are typically intimate affairs where all your guests know each other. Some good food and drink, maybe a great playlist and you should be fine. If you do decide to play a game, try for something a little more adult.

At the end of the day – it’s your party. You make the rules!

Truth is, Gender Reveal parties are so new, they don’t really have any. So tear up the non-existent playbook and do whatever you feel like. Just be aware that you shouldn’t need a program to keep the positive vibes flowing. Family get-togethers are fun enough without the need for extra stimulation.

What to bring to a Gender Reveal Party?

The big question is – do I need to bring a present to a Gender Reveal? Totally not.

Unless the Gender Reveal party is combined with a Baby Shower, gifts are completely nonobligatory.

If you feel uncomfortable turning up empty-handed, you can bring a small gift, in neutral colors. Something from their baby registry, if the parents have one, would be very appreciated. However, do not bring a big or extravagant gift because you do not want to make other guests feel embarrassed or the hosts feel uncomfortable.

A package of diapers or plain onesies is a sweet gift. Perhaps bring something for the mom to be instead. It’s usually early on enough that she’s more interested in gifts for her, than for her bump. A scented candle or house decoration for $10 are good gift ideas.

Alternatively, call the hosts and ask if you could bring something to share with everyone, a cool salad or a bottle of wine. Keep in mind that it’s completely not necessary. Gender Reveal party etiquette is to show up as you are.

What to wear to a Gender Reveal Party?

Again, Gender Reveal parties are usually small intimate gatherings. Play it by ear. If the Gender Reveal is at the host’s house, choose casual or smart casual. If it’s in a fancy location, dress up – it’s not a wedding though, dress up but not overkill.

A word of warning to hosts. Do not ask your guests to dress up in the colors of the gender. It can come over as pushy and may force guests to buy clothing just to fit in with the color scheme. Keep the Gender Reveal party chilled.

Who knows the Gender at a Gender Reveal Party?

Gender Reveal parties are very new. It depends on the parents. If they want to know the gender then they should be the ones to know the gender. A caveat to this, of course – make sure the parents are genuinely ok with either gender. If one of them will be disappointed, it will ruin the whole evening and may cause friction and tension as they won’t be able to process their emotions privately.

If you do want to find out the gender of your baby along with your loved ones and experience the thrill and excitement along with them, ask your ultrasound technician to write down the sex and slip it into an envelope. Then take it to a local bakery and let them create you a magical reveal cake. When you cut into it, you’ll be surprised along with everyone else.

Is there food at a Gender Reveal Party?

The rules are very fluid. If you want to keep the tone simple, then buy some nibbles and a few drinks. Plus this is also a budget friendly option.

If you feel like making an all out bash – go for it.

Another nice idea is to have gender-themed foods.

BBQ’s are a popular option, being classier than pizza but still chilled out and fun.

Check out this post for our top Gender Reveal Party food ideas.

Should I serve alcohol at a Gender Reveal?

It’s not expected for alcohol to be served at Gender Reveal parties. However, if you feel like breaking out the bubbly, why not? Guests shouldn’t turn up expecting a free bar.

How should I invite guests to a Gender Reveal party?

You don’t need to go fancy. You can find beautiful templates on websites like Canva or Etsy, to jazz up your invite with cool visuals and color-popping designs or go muted and classy. Find a template, customize, and email to your guests.

Where to have a Gender Reveal Party

The party’s locale sets the mood for the whole event. Remember, Gender Reveal parties are usually more intimate gatherings. However, you should choose whatever suits your budget, your taste, and your fancy. Let’s explore the etiquette for various locations.

Budget friendly, having the big bash at home feels good on the wallet. It will create a more cozy, homey vibe which works great if you’re only having close loved ones around.

Just because you’re staying at home, shouldn’t mean you need to feel at home. Drape some fabrics around in different colors, blue and pink or in a neutral color or go for rainbow splashes. Themes are fun, they take any party to the next level.

Choose a color scheme and decorate the party area and tables to match.

Decor doesn’t have to be expensive. Shop around. A little smart googling will go a long way. Amazon has great selections of cute party things. Look for multipack buys. If you’re looking for ideas about themes, check out some of our other articles.

The great thing about outsourcing, is that there’s no stress on you to perform, plan or prep. Rock up and enjoy. And when all is said and done? There’s no cleanup!

While many restaurants will allow you to bring in small gender reveal props, most will insist that you order a cake from them directly. Also, they probably won’t be ok with messy, noisy or extravagant Gender Reveals so you are limiting your options. But if you want to stick with the traditional “cutting the cake” reveal or are opting for more low-key options like scratch cards, a restaurant could be a fantastic option.

If you are hosting your own Gender Reveal party – you’re pregnant, you have enough to be busy with!

That said, you can certainly get more creative at home. It all depends on what sort of gender reveal party you’d like to have.

Who doesn’t love the great outdoors?

Make sure to check the weather and make contingency plans, just in case.

When the weather is glorious, take the fun outside. It also gives you the space to throw extravagant reveals using cannons and balloons or pinatas. Remember to clean up afterward. If you’re going down the nature route, why not hold a picnic? Undoubtedly whimsical and wondrous, fitting to reveal the gender of your expected little bundle of joy.

Make sure the event is well documented. Consider delegating this task to a friend so that you can focus on the party and experiencing the memories rather than capturing them. A cool idea is to get hold of a Polaroid camera and have guests sign the picture which you can place in an album. Or ask guest to record messages to your incoming child for them to watch one day in the future.

If you’re going to be outdoors or in someone else’s house, remember to organize clean up. Gender Reveals can be very messy so plan cleanup in advance. Plus consider hiring a cleaner to reduce your stress.

If you have older children, make sure they’re involved to avoid sibling jealousy. Involve them from the start so that they feel like Mommy’s helpers rather than rivals. And consider allowing them to open the box or smash the balloon to reveal the gender.

Of course, Gender Reveal parties are still very new, so the rules are undefined. Tailor the day to suit your tastes. At the end of the day, it’s all about you having fun and sharing the excitement of the gender reveal. Even if you want to be surprised, you can still organize a big reveal by asking a friend to do the booking for you.

The sky’s the limit so be as creative or as extravagant as you feel. Or keep it low key and classy. It’s up to you.

Have fun and we hope this Gender Reveal party etiquette guide has been helpful!