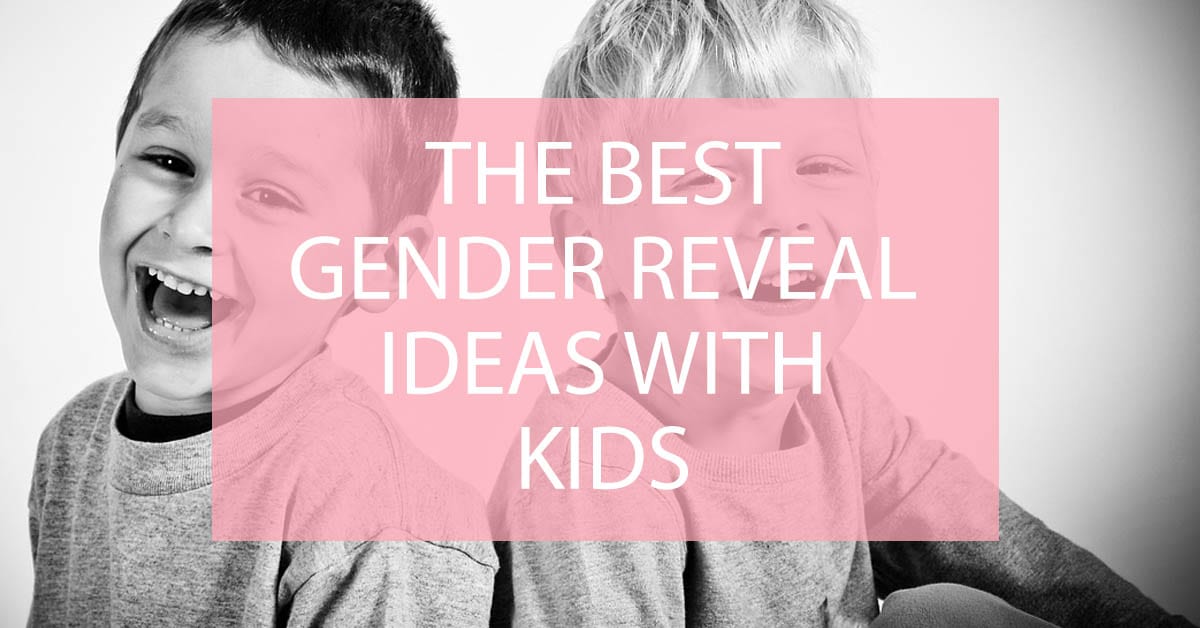 Gender Reveal Parties are the internet’s craze where parents throw a abash and reveal the gender of their little one with creativity. You can go wild with Gender Reveal smoke cannons or budget with Gender Reveal balloon boxes. From cutting cakes to posting poetry riddles, as Mary Poppins told us, in every job to be done, you have to find the fun.

But Gender Reveal parties celebrating the newcomer can make older siblings or cousins feel left out or jealous. That’s why it’s so important to include kids in any Gender Reveal ideas. When older kids are involved in Gender Reveals then they feel part of the excitement, not pushed to the side because of it.

So we’ve put together a super-duper list of how to get your kids involved in their little sibling’s Gender Reveal party.

The 11 most fantastic Gender Reveal Ideas with kids

First up, the Gender Reveal box is a classic. Have the child help you decorate the box and color it. And they can even help you put the balloons in and seal it up if they can be trusted to keep a secret! Then all they have to do is open it and up and all you have to do is snap a photo of the expression of surprise and joy on their faces! Grab our cute Brother or Sister printable here.

Check out our DIY guide for how to make your own here.

Or buy a ready made box here!

Who doesn’t love a good piñata? Your older kid will have a great time hitting the Gender Reveal piñata and they can be in charge of pulling the string to release… the paint powder, balloons, confetti, sweets, or whatever it is you’ve put in there for your Gender Reveal with your older kid! Make your own here with our easy to follow guide.

Or grab a ready made one here.

Next up, at number three in our list of awesome Gender Reveal ideas with kids, the Gender Reveal confetti balloon. It’s simple and it’s super fun and gorgeous. Simply fill a balloon with colored confetti and let your kid be the one to hold the pin and pop! Although little kids may not like the popping noise so bear that in mind when deciding which Gender Reveal option to go with.

Another option that your older kid or kids will love, would be the balloon game. Everyone has a balloon tied to their leg filled with sweets or confetti. The aim of the game is to run around popping everyone else’s balloon but saving your own. Remember to give your kid the balloon filled with the ultimate answer!

Next up, a sugary sweet homage to both your kids! It’s about the newcomer but it’s also about your current only child which should make them feel included and valued. You will need a sign, some coloured balloons and an afternoon of fun will ensue.

Now, this Gender Reveal idea with kids is very simple, it can be used as a grand finale to a Gender Reveal party, or just as a photo-op to post on social media. Simply have your child pose with a balloon in a color specifying the gender and the news is out!

Use your Sonogram photo

Now, this Gender Reveal idea is a slight twist on the last idea. It incorporates your sonogram photo into the pic, use a coloured balloon, shoes or onesie for those who aren’t trained doctors!

Next, this idea will require Mom and Dad’s help but it doesn’t make a loud noise so the ears of your kid are safe! Of course, Gender Reveal cannons are so cool, they’re grand, opulent, loads of fun, a true centrepiece and a great photo. Have your older kid pull the string to set off the cannon and herald the next kid’s arrival.

Be adorable with more picture posing. Fill a room with balloons (use a small space) and there are no scary noises. Have your kids read a letter or point to a signboard. Or write it in fingerprints, go wild, or let your kids pose, it’s up to you.

Pumpkin cheer is here with this next gender reveal with kids. All you need are some pumpkins and kids who are ready to pose.

Santa left us a baby

Xmas can be adorable too with candy canes and twinkle toes and cute hats. You can pose your little one as Santa. Then have them pull a pink or blue bundle out of a bag for a whimsical wonder feel.

If your gender reveal is in the summer, give your kid what they want – ice cream! Then pose them next to a sign and your work is done!

Last up, which kid doesn’t love to fingerpaint. So create a sweet keepsake for your little one to treasure, a symbol of their big sibling’s love and excitement as well as the perfect Instagram announcement.

Involving your kids is important so that you foster good relationships from the beginning. It’ll mean you have things easier and allows your older kid to adjust comfortably. After all, their whole world is about to change! Make sure they feel happy about it by involving them in taking care of their new sibling. Plus, it’ll become a great family memory and a perfect picture for an album!