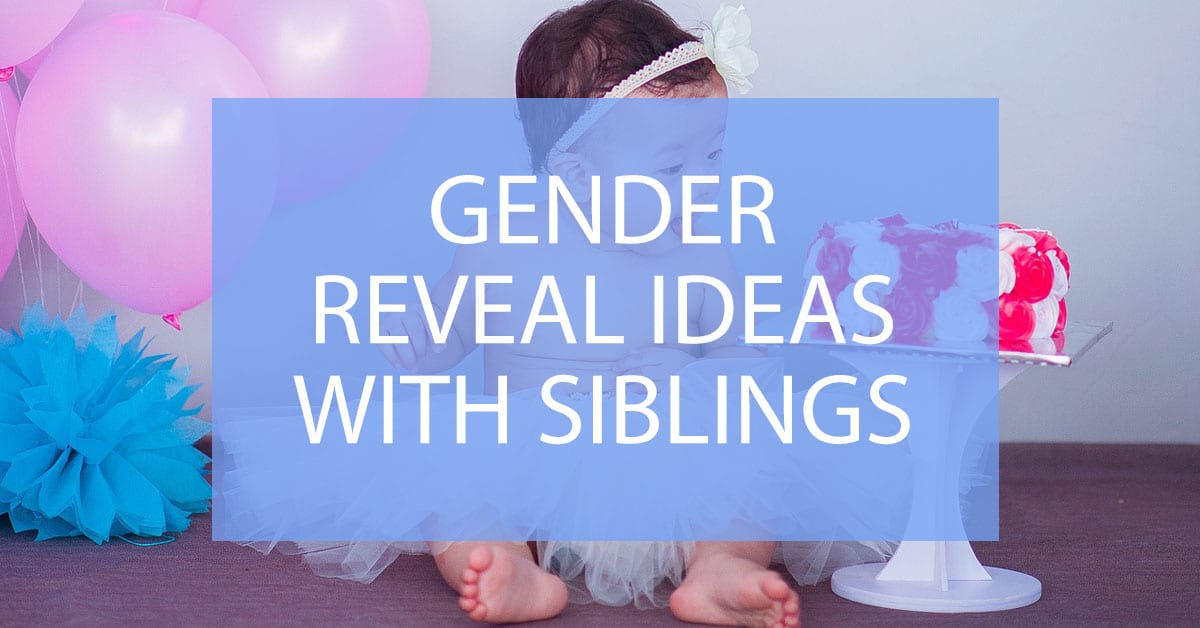 A Gender Reveal with siblings is a great way to include all of the family in your new baby’s Gender Reveal. Not only do you get the super cuteness of your toddler’s excitement, but you also get to make them a big part of the action.

And if you are over the old wives tales, and ready to find out for sure, there are so many cute ways to reveal your Baby’s Gender. From Gender Reveals with dogs, to Gender Reveal balloon boxes, to more extreme ideas like burnouts and smoke cannons! Whichever Gender Reveal idea you choose, it is sure to be an event to remember.

We have put together 12 of the best ways to reveal your baby’s gender whilst involving siblings. Not only are these Sibling Gender Reveals super cute, but they make sure your older child is right in the middle of the fun!

This is a really easy Gender Reveal for siblings to be involved in because their job is straightforward. Simply open the box! Out come the balloons and voila, your big reveal!

Make your own DIY Gender Reveal box (see full instructions here) and decorate with our printable Brother or Sister sign.

Remember to have your camera at the ready to capture their little face when the pink or blue balloons float out! Post it on social media for a cute Sibling social media annoucement!

And if DIY is not your thing, buy your ready made Gender Reveal box here.

Another good Sibling Gender Reveal option is a Gender Reveal confetti balloon. However, if your sibling is on the younger side, they will need an adult to help with the popping. But they will still make for a cute photo opportunity standing under the falling confetti!

Our next Gender Reveal with siblings idea is using the tagline of “only child expiring…”. Now there are lots of ways you could do this, but basically, you include the date of your new arrival and whether the baby is going to be a boy or a girl. Use a chalkboard or a letterboard to write your sign.

If you are planning to use this as a Gender Reveal, then add some pink or blue balloons, or the wording Baby Brother or Baby Sister to the text.

Now this is a sibling Gender Reveal idea as your little ones don’t have to do much more than stand still and hold a number balloon! Get creative with your background. If you have a pretty garden you could take this outside or make it seasonal depending on the time of year.

You can even include your dog in this one! Check out our Gender Reveals with dogs for more pet-friendly reveal ideas!

Use your Sonogram photo

Next up, this example shows how to include the sonogram photo in your Gender Reveal. Adding a pair of tiny pink shoes tells the rest of the story! Check out the big sister’s expression in the background, so adorable! Simply post your announcement on social media for your big reveal.

Another way to use balloons in your sibling Gender Reveal is what this creative Mama has done. And no need to worry about loud bangs! Check out the cute letterboard sign. And how adorable is the little one with her arms in the air, so sweet!

If your Gender Reveal falls in the Fall, this pumpkin Gender Reveal idea could work for you! A simple idea, but really pretty and eye-catching especially with the cozy rug and leaves on the grass.

If you are lucky enough to be making your reveal in the holiday season, take advantage of all the festive cheer! How adorable is this Christmas Gender Reveal idea. You just need a chalkboard and a Christmas hat or accessory and you are good to go.

If summertime is your reveal, then this “what’s the scoop” Gender Reveal would work well! Just make sure you have pink and blue ice-cream on hand for the big reveal!

However, you choose to reveal your Baby’s gender, involving older siblings is always a great idea. Not only do they help make a super cute photo, but involving them in all of the excitement of your pregnancy is always a good idea!

Have questions about Gender Reveals? Join me in my Party Planning Facebook community here.

Check out our Pinterest board for more Gender Reveals with Siblings ideas.