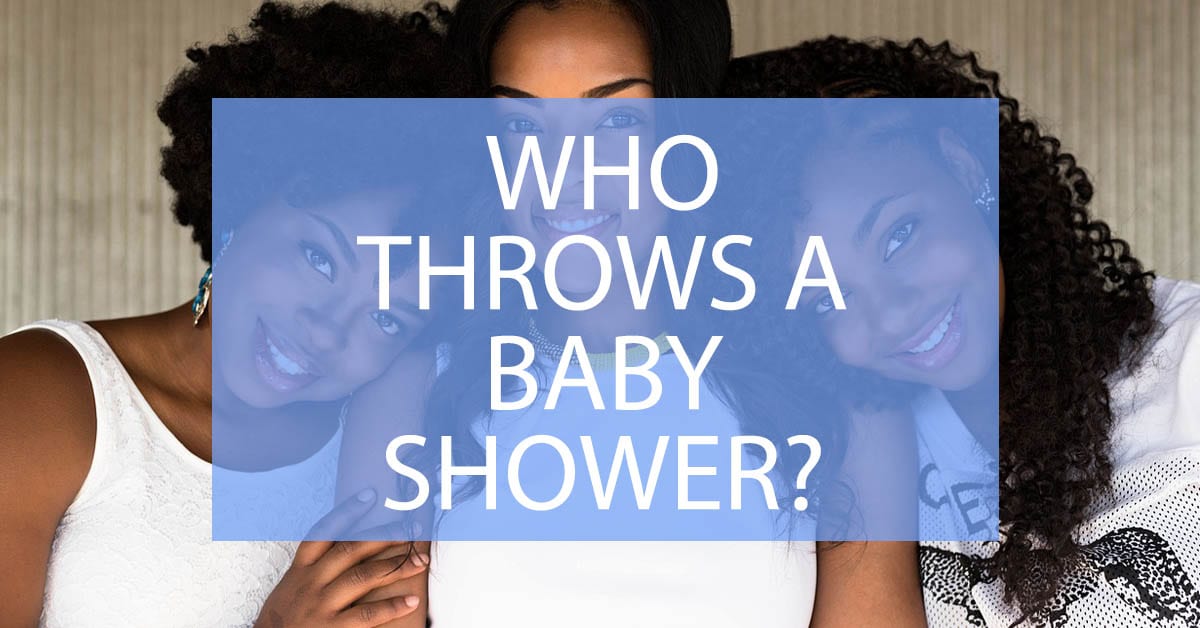 Who throws a Baby Shower? Congratulations! You’re having a baby! Pregnancy is such an exciting time and also really nerve-wracking. Especially when you start working out how much you need and how much it’s going to cost you. Woah, children are precious gifts but boy is it a fortune to have a baby!

That’s where a Baby Shower comes in. Baby Showers have been around for a long time, unlike Gender Reveal parties which are modern inventions as a way to have fun. Baby Showers are about family and friends being there to help and support new parents financially by gifting them with useful baby products to ease the cost of having a child.

Plus, as always, parties are such fun!

But your Baby Shower is quite important, and so the question arises; who throws a Baby Shower?

Who should throw a Baby Shower?

You may find yourself asking, in between heartburn and morning sickness and pictures of adorable onesies, who throws a Baby Shower?

Typically a Baby Shower is planned and hosted by a friend, your sister, a relative, or co-workers. The idea is to shower you with gifts and it’s seen as little impolite to start asking for your own gifts. It’s usually the job of a loved one. This could be your close family, a good friend, or even your co-workers to step up to the task of throwing a baby shower.

In many cases, family, friends, or co-workers will offer to host a Baby Shower for you. But if they don’t, it’s totally ok to ask a loved one if anyone has thought about the Baby Shower and if they would mind taking it on.

It used to be that close relatives and friends wouldn’t host a Baby Shower so that the parents to be wouldn’t seem like they were just trying to get presents. But today it has become a much more cultural tradition. And it’s increasingly common for those close to the parents to throw a baby shower for the expecting lucky mom.

It’s also becoming quite a trend for people to co-host the Baby Shower. This can be a great idea as planning a party can be a big responsibility and hassle. Sharing out the job can make the whole event run smoother and be a more enjoyable experience for everyone.

Can you plan your own Baby Shower?

The short answer is yes.

The long answer is, do what works for you. Especially if your family does not live in the area and you don’t have nearby friends who can take on the party planning. Then it’s absolutely fine to throw your own Baby Shower.

Even though we mentioned that it was perceived as rude for parents to throw their own Baby Showers, today a Baby Shower is an accepted cultural norm. It’s going to happen. You can be the one to make it happen if you want to.

Remember that you can be involved in planning without being the main host. Although obviously without as much creative control.

As long as you are gracious and calm, there’s no reason why you can’t throw yourself a Baby Shower.

Can you have more than one Baby Shower?

Many moms-to-be have more than one Baby Shower. Often this is because of different groups of friends. For example, maybe one Shower is for close family and friends and the other is for co-workers. Or you could throw one Shower for family and another for mates and work-mates. It can be a good idea to keep costs down by having two smaller parties instead of one large one. Especially if your friends are picking up the tab for you. It can also help to make sure that everyone is comfortable and knows each other. Sometimes different crowds require different parties.

Is it rude to throw your own Baby Shower?

The short answer is that it’s not rude to throw your own Baby Shower.

The long answer is that it isn’t rude to throw your own Baby Shower as long as you aren’t rude or pushy about it.

You can’t explicitly ask for something (sending a link to a gift list is ok as long as you have a range of prices for guests to pick from) and you also can’t insist on a gift. Be casual and sweet, invite people to your Baby Shower, they know what a Baby Shower is and that it entails gifts. Many Moms to be have a Baby Registry with one of the large Baby Stores.

If you’re asked if you expect gifts, be diplomatic. Asking for gifts is really rude, so be serendipitous and tell the asker that it would be greatly appreciated, but please don’t feel obligated.

At the end of the day, having a baby is such a special time. You want to share the love with loved ones, family, friends. And yes, the people that you spend your days with at work. A Baby Shower is a fantastic opportunity to celebrate. And also to help parents manage the costs of welcoming in a new member of their tribe. As well as including those who mean the most to you, in the lives of the one person who is going to knock them all off the totem pole very soon.