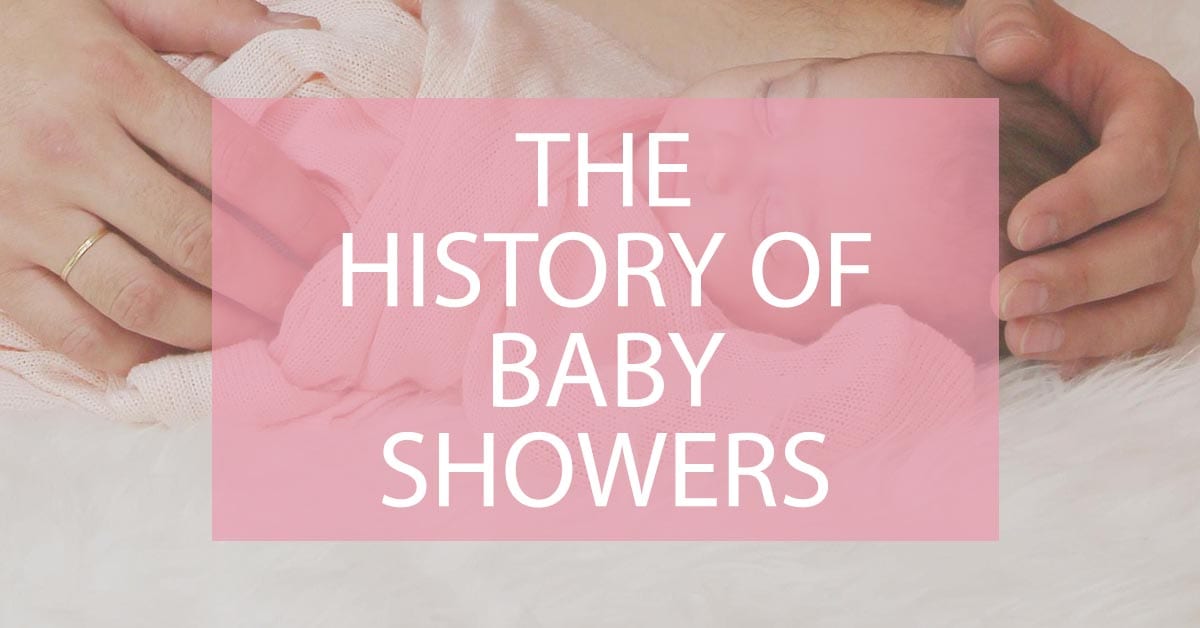 Like every baby, a Baby Shower is unique and special, but where did the idea of a Baby Shower come from?  Is it a modern event? Or has it been around for centuries?  Continue below to learn more about the History of Baby Showers.

Baby Showers are a very special event held to celebrate the arrival of a new baby and support their family.  These events are often part of the journey to parenthood.  They can be hosted by a variety of people and are typically held during the 6-8 month of pregnancy.  Baby Showers can also be thrown in many different types of locations depending on the Mom’s interests and needs.

Sometimes parents to be will create a baby registry, which makes it easier for guests to find items to give.  Speaking of guests, sometimes guests are only women, meanwhile, others may choose to have a co-ed shower.

Where did Baby Showers originate?

Though the term “Baby Shower” is a newer phrase, hosting events surrounding pregnancy and childbirth are not. Throughout history, there have always been different pregnancy rituals. Also events held after the birth of a child.  These events may not look like today’s Baby Shower, but they were ways to celebrate in their own way.

Not all practices were similar to modern times.  During Ancient Egypt, there was the practice of separating the mother and her baby.  They thought birth was “dirty” and visited temples to help remove this “pollution.”  In Ancient Greece, people shouted after labor ended as a way of saying it was now peaceful. Lastly, in Ancient India a ritual was held in the 6th or 8th month of pregnancy where they gave dry fruit to the mother to help the baby’s growth.  Music also played for the baby’s ears to enjoy in utero.

It was not uncommon for a mother to not survive child birth centuries ago.  During Medieval Europe, priests often visited pregnant women so they could confess their sins.  In addition, once the baby was born, they were baptized and Godparents would offer gifts.  Years later during the Renaissance period, more functional gifts were given to pregnant women.  Not long after during the Victorian period, women would hide their pregnancies.  Once the baby was born however, parties occurred in celebration of the new arrival.  These are just some examples of what may have transpired in the past.

When was the first Baby Shower?

It is hard to pin point exactly when the first Baby Shower occurred.  Some believe that the traditional Baby Shower we know today first occurred during the 1940s and 1950s.  This was a time where the Baby Boomer generation came to be and Baby Showers were a post-war way to celebrate.

Why is it called a Baby Shower?

When a life changing event is about to occur, someone will usually throw a “shower” in celebration.  It may be safe to say the word shower means showering someone with gifts.  Like a bridal shower, a Baby Shower is a time to shower a new Mom with love and support.  Furthermore, also shower them with gifts for themselves and their baby.

Are Baby Showers different around the world?

Baby Showers are common traditions in some countries, as seen in Australia, Canada, New Zealand and the United States.  But not every country or culture celebrates this way.  For example, after the baby arrives, Afghan parents celebrate for six nights.  Large secret parties happen in the Dominican, for both men and women to attend.  The event is a surprise for the parents to be!  In France, parents wait to celebrate their new baby until their first birthday. a Stork Party.

Are there Baby Showers for the Father?

Baby Showers are traditionally for women, but many couples are starting to have co-ed showers.  In the History of Baby Showers, are there some just for men?  Hard to know about the past but today, the answer is yes!  Sometimes showers for the father-to-be are called “Diaper Parties.” This is when the Dad and his buddies get together for a hangout, play some games and have snacks.  Diaper parties may be at a friend’s house, in a pub or a sports arena.   In addition, guests bring diapers.  Therefore, this is a great way to make the Dad feel special and stock up on a much-needed item!  Throwing a “Dadchelor Party” is a new trend as well.  Sounds like an awesome way to celebrate a new Dad entering fatherhood!

What about Baby Showers for Second, Third etc. Child?

In the past, a Baby Shower was typically for the first child.  When another baby comes along who will be joining a family, sometimes a Sprinkle event happens.  A rain sprinkle is like a smaller version of a rain shower, so these events are typically not as big.  A Sprinkle is not only a lovely way to celebrate the new baby but a chance to give gifts too.  Especially if a different gender.  A Sprinkle is a fun way to get older children excited about their new sibling too!

In conclusion, a Baby Shower will be a special event in any new Mom or parents to be life.  They can vary in size and location and there is no rule saying a Mom can only have one thrown in her honor.  Hopefully, the information above helped with any curiosity on the History of Baby Showers.  At last, maybe at the next Baby Shower you attend, you can share something you learned!