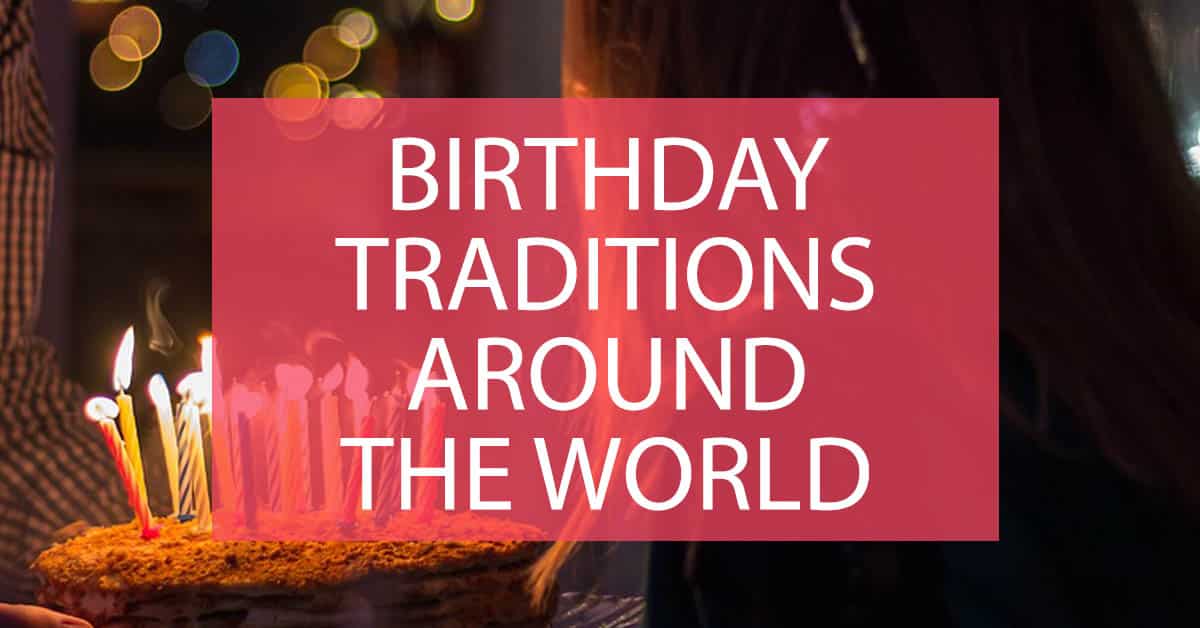 Traditions on how to celebrate birthdays are very different around the world. There are many ways that people choose to celebrate, and they are passed down through families. Often families will adapt the most popular traditions to fit their own needs, and this is how new traditions are formed. The one thing that brings everyone together and is universally shared by most cultures, is marking each birthday in some way. So what are the birthday traditions around the world? Read on to find out.

How are Birthdays Celebrated in China?

China maintains traditions for birthdays that focus on milestone years. They celebrate the tenth, sixtieth, seventieth, and eightieth birthdays for everyone. Celebrated with bowls of noodles called long life noodles, the person celebrating their birthday will slurp the noodles. The long slurp of noodle is believed to represent a long life. Other traditions guide when a birthday is celebrated. Each child is considered to be one year old during their first year of birth. Then they will be said to have turned two and celebrate this birthday upon the Chinese New Year. Many choose to celebrate on their birthday, on the new year, or both, allowing them to have two birthdays.

How are Birthdays Celebrated in Russia?

Russians have many birthday traditions including what meal they eat, what dessert is presented, and when they have the parties. Meals are often made with fish and pirozhkis that are filled with meat, potato, cheese, and other ingredients, even filled with jelly for dessert. The birthday person can request whatever meal they want for their birthday, and it is often accommodated. Just as common as a birthday cake, double crusted fruit pies are also very common. While it is common to celebrate on the day of the birthday or after when that is not possible, celebrating before the actual birthday is to be avoided as bad luck.

How are Birthdays Celebrated in Australia?

Australia is known for many things including hot summers, large bugs, and a beautiful landscape. Most of their birthday parties are held outside and a BBQ is the most popular way to do so. Familiar to many celebrators, these have the expected birthday trappings with balloons and cake, but also are marked with fairy bread. This is a thick slice of white bread that is coated in butter then candy sprinkles, eaten in triangles.

How are Birthdays Celebrated in Mexico?

Birthdays in Mexico are celebrated with a fiesta, or party, that is strongly steeped in tradition. Tacos are often enjoyed as the meal, along with other traditional foods. And they are sure to have a pinata for the children to hit with sticks until it bursts and the candy within is spilled out for everyone to enjoy.

Perhaps the most celebrated birthday is the 15 when girls have the Quinceanera. Marking the transition from girl to woman it is often a large celebration with dances, ball gowns, and a large cake which may require several tiers to serve all of the guest.

How are Birthdays Celebrated in Japan?

Japan has retained the tradition of celebrating the survival of all of the children on November 15th. Rather than celebrate every year for each child, they celebrate the survival of the boys on their third and fifth birthdays and the girls on their third and seventh. Rooted in centuries past when children often did not make it out of childhood, these birthdays see them dressed in their best clothing and taken to a religious shrine where people give thanks for the gift of another year with them. Some children will be given candy and gifts from their families.

How are Birthdays Celebrated in Brazil?

Brazil is a country that has many strong traditions and keeps people close to their roots and beliefs. Birthdays are no exception to this. And in hopes of the birthday person living until their ears can touch the ground, each person in attendance at their birthday party will tug their ears. Even a stranger can partake in this, with each tug representing one year of their life. This is balanced with a feast for the family and friends that includes their decadent truffles.

How are Birthdays Celebrated in Jamaica?

Along with the expected birthday party with friends and family including cake and music, games and decorations, there is a tradition that began as a prank. This tradition includes dusting flour over the birthday person. And it can occur just once during the party or several times throughout the day.

How are Birthdays Celebrated in The Netherlands?

The Netherlands has a few differences between children’s birthdays and adults. The children will often have a full meal served at their birthday party within their own home, while adults will only get cake at their home parties. The greeting is congratulations with cheek kisses, rather than the happy birthday that is shared in other places. And guests will shake the hand and kiss the cheeks of every member of the party including friends and family. They sing happy birthday and end it with a hip hip hooray.

How are Birthdays Celebrated in Norway?

Not only are birthdays in Norway celebrated at the home of the birthday person, but also at schools in their classes. Parties always involve music and dancing, cake, and foods to share with everyone. Each person plans and hosts their own birthday party with all of their family and friends. There they will be sung too and receive a small birthday gift from each guest.

How are Birthdays Celebrated in Ireland?

Irish birthdays are celebrated with friends and family, food and drinks, dancing and singing. And the festivities are often topped of with traditional foods. A birthday bumping may occur, where the child is turned upside down and gently bumped on the floor once for each year of their age. The twenty first birthday is when the birthday person is given the keys to their home in a way of welcoming them to adulthood.

How are Birthdays Celebrated in Egypt?

Egyptian birthday traditions include a party that invites all of the friends and family gathering. Decorations are made to represent the life and growth of the guest of honour. And the main parts of these decorations are often flowers and fruit. A birthday cake is common, however there are not often birthday cards sent.

How are Birthdays Celebrated in Ghana?

Throughout Ghana there are birthdays celebrated the traditional way, with a fried sweet potato patty rather than cake. When the family and friends gather for the birthday party, they will be served stew and traditional games are played.

How are Birthdays Celebrated in the USA?

Birthdays in the US are celebrated in many traditional ways. However the size of the party and how elaborate it is will vary greatly across economic and financial landscapes. There are often decorations of streamers, balloons, and a birthday cake with one candle for each year of age of the birthday person. They blow out the candles while others sing. And if they get all the candles out with one blow their wish will come true. Making a wish and blowing out the candles is just one of the traditions that are observed.

Guests will enjoy games, music, and cake, and will bring a gift for the guest of honour. Some may be small celebrations or BBQs. While others will rent venues to play games or dance at, while still others will throw large and lavish parties with full meals and catering, many decorations, and large gifts. It is common for children’s guests to be given a goodie bag of small trinkets and candy to take home as a thank you for attending.

General Birthday Traditions Around The World

Birthdays are celebrated around the world and this tradition is based upon the times when children often didn’t make it to their adulthood. As it was never known if a child would survive to their next birthday, each year was celebrated.

This has continued through the years. And it remains a tradition that brings families and friends together every year to celebrate their loved ones. The traditions of eating a meal or snacks and a dessert together are common among many cultures, and gifts are often a part of the celebrations.

As time passes each family will form their own traditions. And in this way many are evolving over the years, while some things are so connected to the celebrations that they remain largely unaffected. The tradition of eating cake, or pie, has become one open to many types of cake and often cupcakes are used to avoid the birthday person blowing out candles on a cake everyone will eat, and to allow easy clean up, birthday songs are swapped out for other tunes, and birthday hates have begun to phase out of popularity.